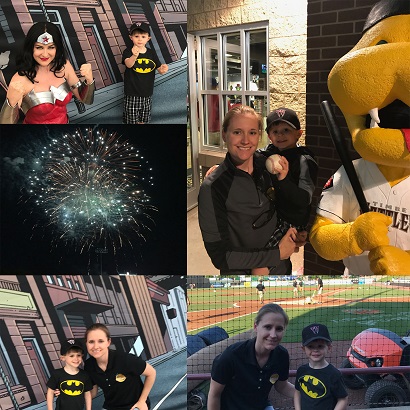 The game also got me to thinking about the WCCU Timber Rattlers game coming up Wednesday August 2. In fact, tickets go on sale this Wednesday, June 28th so act soon before the game is a sell out every year. Tickets are just $6 each and covers the picnic dinner and game tickets. To get yours, stop in at any WCCU to purchase them.

We arrived at Super Hero Night a little early and the kids were able to receive the free Fang toothbrush holder give-away to the first 1000 fans.  We were also able to meet Wonder Woman and Batman and take pictures with them before the game.  It was also really neat to see all the fans dressed up as their favorite super heroes.  Throughout the game they played super hero music and themed the jumbo screen to display different superheroes (home team) or villains (away team) for each of the players next to there current stats.

They also have a fun kids area with playground and bouncy houses for them to enjoy before and during the game, to keep your kids busy if they get bored sitting though all 9 innings. There were food and drink specials going on throughout the game and they had fun activities going on in between innings.

After the game they had a fireworks show and the kids could run the bases if they wanted.  My kids had so much fun that they fell asleep during the 7th inning, woke up a little for the fireworks, but were to tired to run the bases… maybe next time J.

One really cool part of the night was after the game our seats were close to the Rattlers dug out so one of the players tossed us a baseball to keep!  This was the icing on the cake for Cruz he was so excited and kept talking about wanted to go back to the game even days after it was over.   I told him if he is good we can all go to the second super hero night featuring Spiderman in July!

The Timber Rattlers really go the extra mile when it comes to appealing to families and kids.  Throughout the baseball season they hold themed family nights and other promotions the whole family will enjoy.  Some of the popular family nights include: Superheroes, Dinosaurs, Star Wars, Minions, Princess, Bob the Builder and many more.

Below you will find a list of the upcoming Timber Rattlers Family Nights.  I would suggest reserving your tickets early as these events get some of the biggest attendances of the year and could sell out.

Thursday, June 22:  Dinosaur Night with Special Guest Buddy the T-Rex from the PBS Dinosaur Train.  There will also be a fossil dig!  This is a Peanut-Free Night for any fans with peanut allergies.

Friday, July 7: Princess Night #1, where they host a VIP Tea Party in the Fox Club before the game and fans are able to meet some of there favorite Princesses including: Anna, Elsa, Ariel, Repunzel and Elena of Avalor.

Brewers Sunday: Players were Brewers-themed jerseys and Fans can play catch on the field before the game.  After game meet current Timber Rattlers for autograph session.

Qdoba Q’Monday: Purchase any lunch entrée at an area Qdoba on Monday when the Timber Rattlers play at home and you will receive a free ticket that may be used at any Monday home game.

Wednesday: Bang for your Buck! $1 hotdogs, $ Soda and $1 domestic beers

You can get more information on the Wisconsin Timber Rattlers by visiting there website or Facebook page.

If anyone attended a previous Timber Rattlers event we would love to here which one and your experience in the comments section below!

View recent and past blog posts from our WCCU Mom, Krista.

We invite you to join our growing credit union for great rates and less fees!

View All Rates Meet Our Lenders